Tonight’s show started out with dedicating the show to Aaron Seavey and played one of his all time favorite song Chasing The Sun by Planet Funk. Then we played a special mix by DJ Altered State.
Minimal Widget has a Avid love for music that is not so mainstream.
She begun her journey in music production early 2011, using software such as Cubase.5 and SoundForge along with MiDi controllers and hardware synthesizers by Novation.

Dj as – The Altered State – since the begining of 2009.
Her sounds are unique and closely sit in the Techno / Minimal section.
Signed to V K Minimal Techno Label in November 2011 and will be releasing her first ep –
“Psyched Out”

Then we played a mix by Mark Panik & The Viking. “This is a collaborative effort between Hardcore DJ Mark Panik and Northern California’s Dubstep Viking, combining elements of Dubstep, progressive, and ambient sounds into a 40 minute soundscape. Artists include Bassnectar, Infected Mushroom, Caspa, Noah D, xilent, Bushy Vs. NAPT, Tina Malia, Double U, and Specimen A, with music direction by the VIking, and additional sound direction, production and mixing by Mark Panik.”

We closed the show with a remix by Danny Tenaglia titled “Not Over Yet (Danny Tenaglia’s Friday Night at Twillo Mix) by Grace” in honor of his announcement earlier this week that he will be retiring. 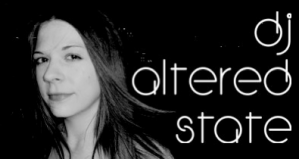 Altered State a young dj and producer not to be overlooked! Her fresh approach to mixin’ it up on the wheels of steel will take any crowd on a trip not to be forgotten.

Producing under the name ‘Minimal Widget’ she released her 1st e.p ‘Psyched Out’ on VK Minimal Techno Label,  wanting to express sounds that are of a deeper, darker atmosphere in her own personal style which is possibly a little bit bizarre, whether it’s a set, remix or her own tracks.

Attending many open air music festivals and some clubs as a pure raver until the age of 20, meeting and mixing with underground dj’s and gradually getting involved with the pirate radio scene… she was now hooked on the sounds of the underground! Finally in early 2009 Roisin (that’s her real name) got the cash to get a set of Technics 1200 turn-tables to start the voyage of dj’ing, and soon becoming a vinyl junkie!  Spinning Minimal-tech / techno in all various sub genres is what she loves the most. 2011 was the year Minimal Widget started to write her own music and Altered State began looking into digital dj blending. But, she will never give up the turntables & vinyl!

In August 1988 Roisin was born and subsequently raised in the South of England (UK). From a young age she was well into the dance side of electronic music, busting out body popping shapes whenever a bass line was heard.

Having young parents was definitely an advantage to her great taste in underground music growing up listening to the early sounds of ‘House’ & ‘Rave’, not to forget the ‘Motown’, ‘Northern Soul’ and ‘Reggae’…even the rockin’ and psychedelic bands of the 60’s and 70’s!

As a teenager she soon fell into the Trance scene as well, loving the expressive sounds of synthesizers and how such a sound can grasp hold of your feelings and take you on a journey of natural highs and lows. The horizon of sounds soon opened, finding the likes of, ‘Nightmares On Wax productions’ and M.A.N.D.Y, she appreciated their captivating energies and flow, inspiring Roisin in life & music for then and time to come…