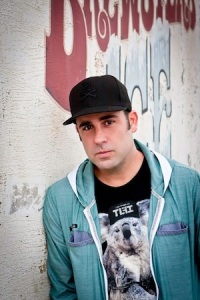 Wally Callerio
Facebook page
Los Angeles, Calif.
Originally hailing from Boston, Wally Callerio (a.k.a. Poncho Warwick) made his way to the sandy beaches of Orange County as a young child and hasnʼt looked back since. An avid music lover as a young child, the transition to djʼing was a natural progression. “I donʼt really know why I got into djʼing” Callerio says, “I just loved music and listening to it. This was a way for me to not only listen but manipulate what I was hearing…I was interested in mixing 2 different sounds…”

Widely regarded as one of the premier producers and selectors in his genre, Callero continues to push the musical envelope. With over 40 original tracks and 15 remixes under his name in 2011 alone, itʼs no wonder that his label, Dufflebag Recordings continues at the musical vanguard even after 14 years. From itʼs humble beginnings with acclaimed tracks “Deju vu/Whispers” and “In Your Arms/Thisgo,” Dufflebag has since released music of both house heavyweights and up-and-coming talents alike including: Derek Dunbar, Corduroy Mavericks, Manjane, and Will Jax. Contrary to other labels, Callerioʼs philosophy and approach to creative disposition is simple: trust the artist and give them full discretion over their artform.

As a dj, Callerioʼs signature sound showcases a blend of improvisation, technical
wizardry, and a crate that spans nearly two decades. Drawing upon influences from Quincy Jones, Stevie Wonder, A Tribe Called Quest and Frank Sinatra, Wally knows where he wants his focus to be: the vocals. Callerio explains, “I want people to walk away whistling a melody or singing a vocal that sticks with them.” And if youʼre one of those who have had the opportunity to experience it firsthand, you can attest to his ability not only make your feet move, but your ears smile.

As a producer, Wally challenges and stretches the boundaries of musical construction. Experiments in phrasing and selection are some of the key ingredients that produce the creative dissonance that is signature of his sound. Wally explains, “I am trying more musical, crossover house while trying to keep that underground feel. I donʼt want my music to be limited to just 8-bar phrases. I like to experiment, break some rules and make the listener think about what they are hearing.” And with over 20 years under his belt, his diversification goes unmatched; his tracks have been known not only to be enjoyed on the dancefloor through massive sound, but also in listenerʼs homes while enjoying a lovely dinner.

2012 marks the iconic labelʼs 15-year anniversary. Whatʼs next? “For one, a number of new changes…” Callerio remarks, “ I donʼt try to predict the future of house, I just try to give it my imagination and push with my music. I try to inspire people into making and playing the right stuff.” Although these changes remain to be seen, if the past is any indicator of what to expect, one can only be sure that Callero will have a few tricks up his sleeve.