Tonight we have a special guest mix by Jerry Flores starting at 7pm.
Jerry Flores is dedicated to sharing his love and passion for House & Garage with others who share the same love and also those fascinated with the sound..Always seeking for the best,rare,hits,b side and commercial club classic since 1993,….”Passion from within, through the mixer and right out the speakers”
>>CLICK HERE FOR SHOWS ARCHIVE<<

Be sure to check out this event going down Sunday Night. 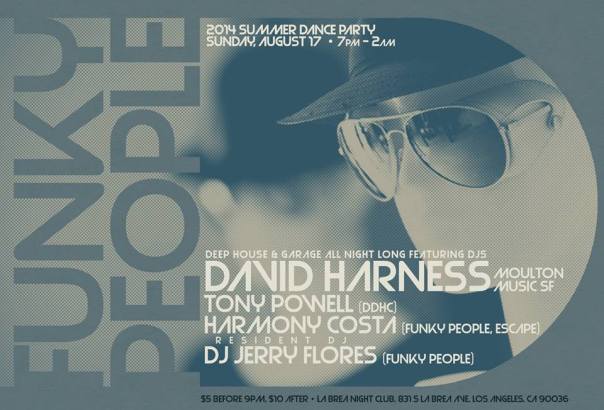 Let’s welcome DAVID HARNESS to FUNKY PEOPLE the only way we know how ~ through the unification and love of dance!

“David Harness is one of the most popular DJ/producers in the San Francisco Bay Area club scene. He has been described as ‘a man who lives, breathes and emanates everything that is beautiful about deep house music and classic garage.’ David is considered a ‘rising star’ within the dance community.’ With influences varying from Barry White and the Love Unlimited Orchestra, Harold Melvin and the Blue Notes, Quincy Jones, the Jackson Five, Stevie Wonder, Parliament Funkadelic, the Isley Brothers and First Choice, among others it’s easy to see why funk and soul have always been strong elements in his sound.”