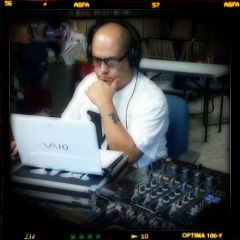 Show’s audio archive
Lonny Rodela aka Temple Complex of “Mninety9sound” has been a part of the underground RAVE scene for 20 years. He started mixing House and Techno at the age of 11 years old and was introduced to Disco by his father who was a DJ in the 80’s and went by the name Ooh La La. His mother who listened to New Wave had a huge impact in his taste in music along with her sister who listened to Deep House and Techno. The combinations of these genres played along side by side to the rhythm of his heart. His older brother took him to his first massive in 1997 called “Count Down” at the Los Angeles sports arena. It was only fitting that he met head on with his destiny after that. He was not only intrigued by the music and movement but by the sound and stage setups. It was at that moment he knew where his life would be directed and that music would be the only joy that life would bring him. He immediately started promoting for many crews and attended every event no matter what the cost or how far the journey. He would admit that there were choices in those years he would do different but the knowledge and experience is what makes him educated and unique. He was not interested in fame and glory from becoming the next superstar DJ even though he had countless chances but made the choice to reject all offers. He only wanted to bring the gift of music to the unknown ears of the people who have never heard house music before in their lives. Lonny Rodela, has played all over from raves, bars, lounges and nightclubs such as The Yost, The El Rey Theater, The Roxy, The Key Club and has even been featured on 88.9Fm KUCI. To him there are no boundaries or limits to how far he will go just to keep the music alive.