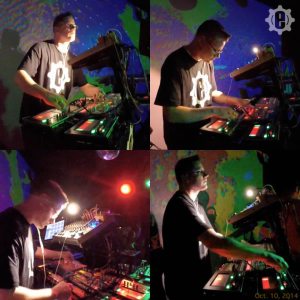 ENGINEEER:
Holger aka “Engineeer” is producer and live performer of electronic music. Born and raised in Germany, he is highly influenced by the european club and rave culture
of the 90s, as well as the pioneers of electronic music and today’s so called EDM. He loves squelching acid bass lines, which he incorporates in most of his tracks.You can find his music and live pa sets when searching for Engineeer – with triple “e” – on SoundCloud and Mixcloud.Sharing the love to Acid House, Acid Techno, Acid Trance and other 303 driven styles is his passion. With his new event Series “Acid Rain”, Holger wants to make
the 303 sound more popular and give artists of this genre a platform to grow their audience. Before starting “Acid Rain”, Holger gained experience in event organization
by helping to organize the San Diego based event series “AcidVarsity”.

Holger is also main organizer of the Orange County Electronic Music Producers (OC EMP) meet-up group, which discusses all aspects of music production and recording,
as well as other aspects which are essential to be a successful musician. Members can bring their tracks to the group for review and find partners to collaborate. The group
is a great place to network among producers, DJs and musicians.

Rvltion-909:
Rvltion-909 aka Lou Acosta is a SoCal based House Music DJ who first started spinning vinyl in 1997. Local havens such as Dr. Freecloud’s Record Shoppe in Orange County fueled his growing fascination with electronic music & opened his eyes to a world of emerging subgenres. Carefully studying DJ technique, he developed an affinity towards mixing styles that used subtle nuances over longer periods of time, creating “journeys” with his mix sets. As he refined and developed his sound, he dove into the digital realm (applying new technologies and acquiring a taste for music production). He has played such local venues as Ten (X), Proof & House of Blues. Some of his production work can be heard on labels such as Exclusive Recordings in the UK. His monthly DJ mixes in the flavors of; House, Progressive, Tech & Acid can also be heard on Melodic Tronic Radio (KX 93.5 FM Laguna Beach).

T3TSUO 303:
Dutch born DJ/ Producer T3TSUO 303 has been part of the techno scene for
many years, producing and performing under different monikers and currently
operating from Los Angeles, California.

In 2013, inspired by japanese cinema and technology , he invented a new style and name to go with it.
The name T3TSUO comes from Shinya Tsukamoto’s Tetsuo films, and 303 from the famous Roland TB 303 bassline synth­ which is one of the core ingredients for making genuine Acid music. Both are major influences on his audio/visual style for this brand.

After the underground success of “Mada Okiteru” from the Live in Tokyo EP (supported by people like Andrew Weatherall), we are now seeing “Visitor Q” and the 0010×0010 collaboration “Bullet Ballet” climbing the Acid and Techno charts.

2015 promises to be an interesting year for T3TSUO 303, with many DJ and Live PA shows across the globe­ kicking off at OC’s “Acid Rain “ events with a Live PA set February 5th.
Info : t3tsuo303.com generationacid.com
Bookings : bookings@hadesagency.com
http://t3tsuo303.com/