DJ AUDIO-C
DJ AUDIO-C :First started playing 80s flashback rock music for parties and clubs. He was one of only two djs in Orange County playing and beat matching 80s back then. Started playing house and any type of electronic music, but needed more to expand his skills. It wasn’t enough to just beat match. Eventually picked up scratching and turntablism. Developing his skills by beat juggling, scratching and making his own samples out of just two turntables. In the early 2000’s he began to compete against other djs, and also started djing for a live rock and funk band.

Currently increasing his skills by digital djing. He’s taken on Controllerism and its been a big part of his game. “I’ve learned that you could do so much by just grabbing a small part of a song and turn it into a complete remix of the same song on the fly.” DJ AUDIO-C

Member of Milk Karton DJs in Orange County, CA. Played at club venues in and around Orange County. Originally from Anaheim, CA…..TRAGIC KINGDOM

Open to different styles of music. Recently playing Electro-House music. “This music lets me create and redesigned what I want my crowd to hear.” DJ Audio-C
Now he’s back in Anahiem, California and trying to get his foot back in the door. 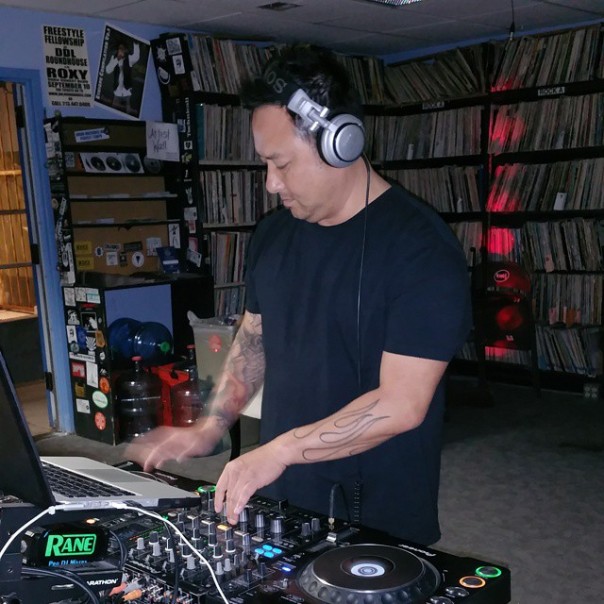 JOHN V
JOHN V: based in Orange County, CA yet played mainly in the Los Angeles arena since 1987. After getting his first set of turntables, circa 1988, his dj talent began to expand from backyard events into warehouse parties, in which we all understood it at the time as the Los Angeles Underground Scene in the early 90s. One of his first memorable gigs was playing the opening set at the local LA high school dance alongside djs Sandra Collins and Taylor. This gig landed his musical dj career into playing for Los Angeles based radio station, Renegade Radio then off to Groove Radio.

In the early 90s, John V continued his passion for progressive dance music which lead him to play at some of LA’s most memorable events, such as, Narnia, Nocturnal Wonderland, Techno Flight . . . Although John V never had an LA residency at the local clubs, he has played the vast majority of them, including, the Palace aka Avalon, Vanguard, the Key Club, the Roxy, Grand Avenue aka the Shark Club and the Mayan to just name a few. In addition, John V has displayed his musical talents for the masses in the arenas, such as, the Los Angeles Convention Center, the Anaheim Convention Center and the Long Beach Convention Center for various one offs.

While his love for progressive dance music expanded, John V ventured off the underground scene and attempted to play mainstream radio for Power 106FM under the musical talent of Richard Vission for his Powertools radio show. After winning the Powertools dj contest in circa 94, John V focused primarily on creating and exploring into his dj sets to take his crowd on a musical journey. His progressive house style was uplifting, which led to the harder sounds of progressive trance. At the time, most djs were playing the typical mainstream radio house genre while John V had his eye on the musical talents of Sasha and John Digweed since circa 94.

Today, John V’s focus is on his professional career and family, yet he has never let go of his love and passion for the progressive dance music scene. His dj sets will sure throw you on a musical journey from start to finish with his melodic rich sounds of what he calls “adult” style house, sexy driving beats, piano synths which tells a story embodied by musical influences of Sasha, John Digweed, Guy J, Nick Muir, Henry Saiz and Maceo Plex. Let the journey begin and “enyoy the ride . . . “

Be sure to check out Fundraiser for Jared #JaredWakeUp #FixJaredNow

Please come out and show your support for our dear friend, Jared Griffith!
On New Year’s Day, he went into full cardiac arrest and has been in a coma since. Jared is a fighter and continues to fight to come back to us. He will have a long road to recovery ahead of him, so we want to help him out as much as possible.

We will be selling T-Shirts with a logo specially designed for Jared for $20 ea. (All proceeds will go to Jared)
We will have men and woman T-shirts sizes available.

Big Rob will be cooking up his famous bacon wrapped dogs starting at Noon. The Juke Joint is donating the food. We will be asking for a donation of $5.00.

Let’s all come together and show Jared our love and support!

If anyone has a band that is willing to play or DJ system you want to set-up, please contact Robert Madrigal or Valerie Burns.

Let’s make this a great turnout!