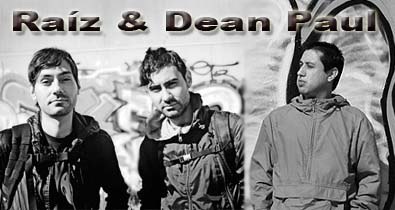 Los Angeles born and bred, Vangelis and Vidal Vargas were raised in the ’80s on a steady diet of Latin freestyle, electro, and new wave that pervaded their urban environment. Their father also exposed them to cutting edge progressive acts Vangelis, Tangerine Dream and Kraftwerk, planting early seeds for aural exploration. By the mid ’90s they were sampling LA’s underground club scene and heavily researching electronic music’s roots. After years of influence they began to express their musical vision through their own recordings and performances. Vidal and Vangelis eventually found common ground with producer / performer Drumcell, and in 2002 they formed the Droid Behavior event production group and record label out of frustration with the city’s lack of knowledge, acceptance, and understanding for Midwest-bred techno and house music and their European counterparts.

Raíz fully harness the capabilities of Traktor, Ableton, and Maschine technology to create a thick blend of Detroit influenced techno and gritty house. They take cues from years of classical training to infuse dynamic musical expression with a delicate balance of mixing board acrobatics and symbiotic intuition. Years of production experience inform their Live PA / Digital DJ hybrid approach, which uses each track’s core essentials to form a narrative arch for every unique set. Their releases follow suit and take only key elements from each rhythmic style to shape simplistic and deep music that captures their diverse influences and personal impressions.
Links: RAÍZ – RA – Soundcloud – Twitter  – Beatport

Dean Paul has always been an avid fan of the electronic music genre. He has played for some of the largest nightclubs/ underground venues, desert raves, boat parties and jam-packed the dance floors in the City of Angels as well as the Bay Area. Born May 23, 1981 in Los Angeles California, he had his first exposure to Techno during the early 1990’s. Many consider this to be the golden age of Techno and definitely a great time to be introduced to this music. This influenced his deep minimal sets have earned him respect and admiration among the underground Techno community in Los Angeles.

Currently working with Droid Behavior, Dean Paul has played with the likes of: Prototype 909, Jpls, Derek Palaskitko, Jimmy Edgar, Modeselektor, Ellen Allien, Richard Devine, Hyperactive, Surgeon, Ambivalent, Tim Xavier, Robert Hood, Octave One, Alexi Delano, Tony Rohr, and Dj Pierre. He incorporates all elements of electronic music into his sets to create an atmosphere of enjoyable beats that are always in sync with the time of the show, the crowd and location. From deep techno, to acid, tribal and minimal techno, Dean Paul continues to broaden his audio spectrum. He presses hard to work with only the latest technology which has enabled him to mix and record live sets. With his vision of continual growth, he is currently developing visual effects to be projected simultaneously as he spins.
Links: Dean Paul – RA – Soundcloud – Twitter